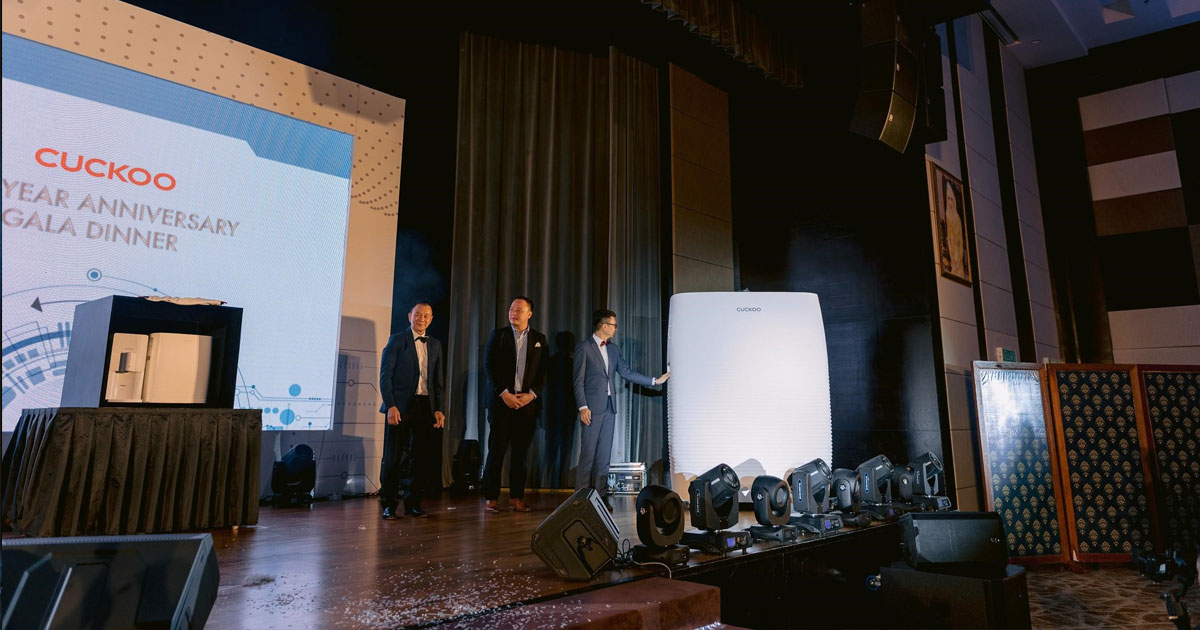 The Cuckoo Xcel Water Purifier was carefully designed with clean, elegant and minimalistic aesthetics to ensure it can perfectly blend in and compliment the users’ kitchen.

The Xcel is a state-of-the-art water purifier that has been fitted with various technologies that aims to provide convenience, such as the operation status indicator, manual and auto water dispense function, and the one touch direct control buttons.

The Xcel is set to make its debut in the local market in September 2019 where it will have an outright price of $1,400 with a limited-time promotion of a free Cuckoo Max Blender. The promotion will only be available until end of October 2019.

The sleek water purifier will also have a ‘While Stocks Last’ promotional Rental Plan where the public can make the Xcel Water Purifier theirs for as low as $55 a month with 5 years free Natural Care Service (NCS).

The Cuckoo Max Blender is a contemporary blender that was designed with precision to achieve optimum productivity, while maintaining a simplistic and user-friendly design.

The stylish blender uses a 1.7 litre capacity container with three blending styles: a blender blade, a whisk, and a high-quality triple stainless-steel blade.

The Max Blender also uses various technologies to improve the users’ blending experience, such as the high-performance motor that has a two-stage power, anti-slip device and lock safety mechanism.

The blender will also hit the local market at the end of September 2019 where it will have an outright price of $360.

The Max blender will also have a limited-time bundle promotion where the customers can just top up $10 every month to any of their new or existing Rental purchases.

The C Plus Model is a fusion of Air Purifier and Humidifier where it has a Customised Filter with Better Instant Humidification where it helps maintain the level of moisture of its users’ home, at the same time, purify and clean the air through its 7-level filtration system.

The two-in-one air purifier uses a Plasma Ionizer and an upgraded Ultra PM2.5 filter which can eliminate up to 99.95 per cent of airborne dust and turn harmful substances into clean air.

The C Plus Model will also be the first air purifier and humidifier in Brunei with a periodic service. The new product will now be available at all Cuckoo stores across the Brunei-Muara and Belait districts where it will have an outright price of BND $1,200.

Cuckoo International Brunei then went on to officially launch the all-new Cuckoo Connect. The Cuckoo Connect is an online platform that aims to bring convenience for all Cuckoo customers by providing them the ease of access to all their Cuckoo purchases’ information.

This information includes their service history, order history, customer information, payment history information, billing and invoice information. To provide more convenience, the Cuckoo Connect will also allow customers to directly get in contact with Cuckoo through the Live Chat System, at the same time, allowing customers to give feedback and to book their next servicing online.

On top of that, the Cuckoo Connect will also allow customers to make their monthly rental payment online.

The Cuckoo Connect will also feature all Cuckoo products where customers can browse and learn about all the products through comprehensive views and information, such as its features, specifications and more.

The Cuckoo Connect also has a section where the customers get to learn fun new recipes for them to try out on their Cuckoo Multi-Pressure Cookers or Cuckoo Max Blender.

The CEC is a platform for customers to come, experience and have a glimpse of the Cuckoo products in a home environment as the centres are located at housing areas in Brunei. The new initiative is aimed to make Cuckoo closer to its customers by being their next-door neighbour where they will always welcome the customers to the centre and invite them to the various activities and events held at the centre, such as cooking demonstrations, blood drives and more.

Currently, Cuckoo Brunei has opened up its first two centres in Kg Mata-Mata and Kg Sungai Tilong. Cuckoo Brunei will continue to open up more CECs across the nation in the future.

For more information about Cuckoo, please call the Cuckoo Careline at 233 3330 or visit www.cuckoobrunei.com or Cuckoo Brunei’s Facebook page.