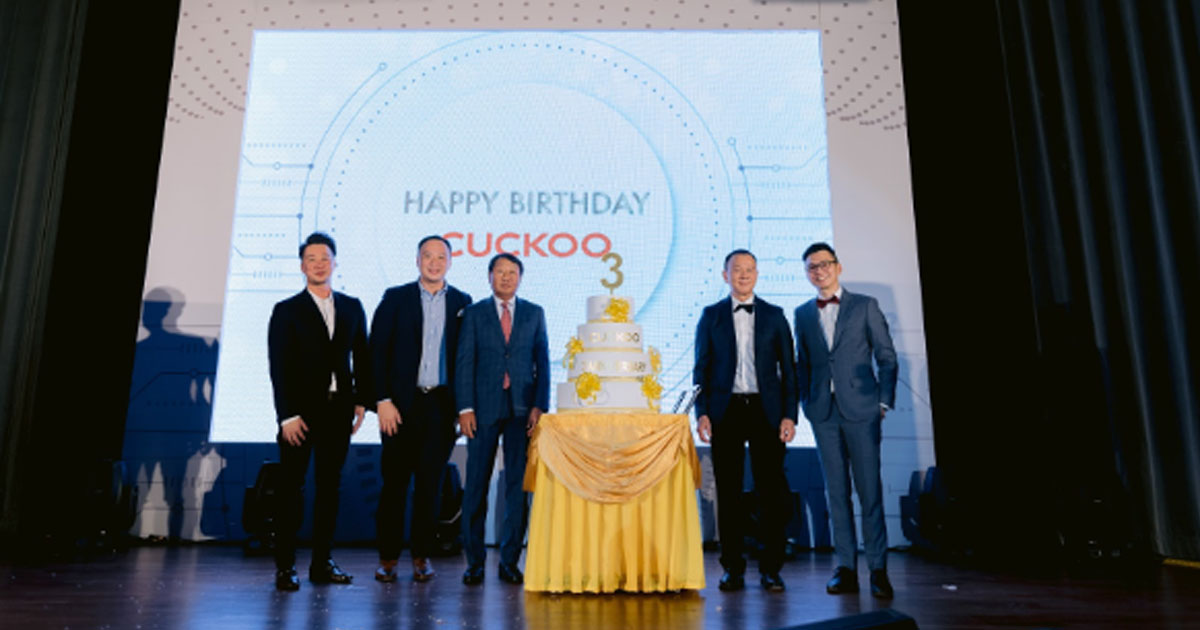 This year marks Cuckoo International (B) Sdn Bhd’s 3rd anniversary, and to commemorate the milestone, Cuckoo Brunei hosted a gala dinner for its guests, business associates and the media. H

eld at the Serambi Suluh Ballroom, Tarindak D’Seni in Kota Batu, the Consular of the Republic of Korea to Brunei Lee Tae Hyun as the Guest of Honour and over 400 guests joined Cuckoo Brunei to celebrate its achievements and milestones throughout its third year in Brunei.

During the event, the Managing Director of Cuckoo Brunei Wong Kim Guan shared that Cuckoo Brunei will continue to stay committed in maintaining and improving its after sales service to meet the satisfaction of its customers.

Wong Kim Guan added that Cuckoo Brunei will also stay committed to give back to the community through various initiatives, such as donations and creating career opportunities for locals.

“As part of our social responsibility, we have created over 100 career opportunities for Bruneians using our platform and we will continue to meet our objectives for providing a platform for our local employees to have the opportunity to grow, develop and succeed with Cuckoo,” he said.

Cuckoo Brunei has also given back to the community through creating a revolutionary ‘Rent-To-Own’ plan for its products that allows customers to choose the amount they can afford and a duration they are able to commit to.

“With a goal of creating a healthy home, Cuckoo allows families to enjoy Mild-Alkaline water purifiers from as low as $35 a month. We believe the core reason is that consumers love the flexibility of a monthly budget to enjoy clean and healthy water,” Wong Kim Guan said.

The event then went on to celebrate the achievements of its staff where over 20 awards were handed out in recognition of the chief managerial and managerial promotions, income, sales contribution, and outstanding performances.

In conjunction with the special occasion, Cuckoo Brunei officially launched three new products to join the ever-growing Cuckoo product family. The first product launched was the all new three-temperature Cuckoo XCEL Water Purifier. Followed by the launch of a new line of Cuckoo products with the new Cuckoo Max Blender and the Cuckoo C Plus Model Air Purifier.

Cuckoo Brunei went on to officially introduce its Cuckoo Connect online platform. The platform aims to bring convenience for all of its customers by giving them the easy access to all their Cuckoo purchases’ information, live chat system, product information, monthly rental payments, and fun new recipes for their Cuckoo Multi-Pressure Cookers.

Cuckoo Brunei also officially launched its all-new Cuckoo Experience Centre initiative (CEC). The CEC is a platform for customers to come, experience and have a glimpse of the Cuckoo products in a home environment as the centres are located at housing areas in Brunei. C

urrently, Cuckoo Brunei has opened up its first two centres in Kg Mata-Mata and Kg Sungai Tilong. Cuckoo Brunei will continue to open up more CECs across the nation in the future.

Other than the new exciting launchings, Cuckoo Brunei also looked back to all the Cuckoo Care Foundation activities that has been carried throughout its first year.

The Cuckoo Care Foundation, launched in September 2018 in conjunction with Cuckoo Brunei’s 2nd Year Anniversary, is Cuckoo Brunei’s Community Social Responsibility (CSR) platform where Cuckoo Brunei uses to give back to the community and environment through donations, educational activities and more.

Since its launch, the foundation has donated over a dozen water purifiers to local communities such as mosques, non-government organisations and educational institutions. The donations are part of the foundation’s long-term global initiative that aims to provide communities with convenient access to clean and safe drinking water.

Other than donations of water purifiers, the Cuckoo Care Foundation has also donated items of basic necessities to people in need such as underprivileged families and orphans.

The Cuckoo Care Foundation has also organized a Cuckoo Blood Drive in collaboration with Jerudong Park Medical Centre as a step to propagate the significance of blood donation in saving lives. Furthermore, the donation was aimed to assist in sustaining an adequate supply in the national blood bank.